The Magic in Fire - Book Tour and Giveaway 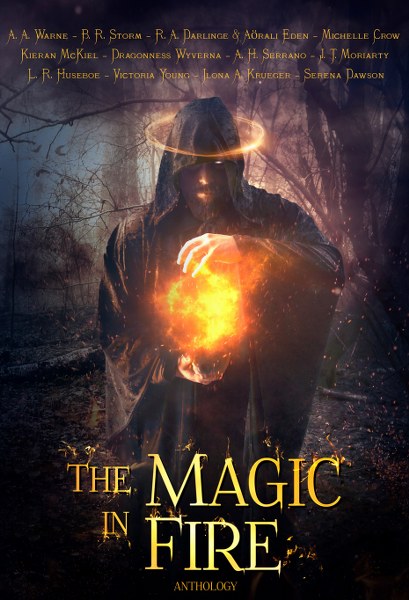 *** 12 MAGICAL TALES IN ONE MASSIVE FANTASY COLLECTION ***
Twelve stories - Thirteen authors.
One theme - The Magic in Fire.
FEATURING IN THIS ANTHOLOGY:
Victoria Young - The Doll Boutique
There’s nothing healthy about a tan – Melinda had heard the warnings and frankly, being stuck in a cramped white coffin was not her idea of fun. But when she wakes from the solarium bed in a dusty prison cell, Melinda realises she’s gotten herself into a tighter spot than she expected.
Dragonness Wyverna - Fire Under Water
Humans have come to the desert, and with them comes death. The oasis has been an indestructible black rock and shelter for the Desharihn fire sprites for generations. But when a band of humans arrive to mine the rock, it is up to Fia, the last Rahar sprite, to save the tribe from the humans’ immutable greed.
A. H. Serrano - Conviction by Fire
Blessed with the power of fire, Lhii Fuéra’s duty is to protect, but in the aftermath of a murder, she’s the one placed on trial. As the daughter of a great general, Lhii soon realizes that justice matters little among the powerful, and she’s faced with a choice: Become the victim or blame the victim.
L. R. Huseboe - Flames of Green
Jaer and his Knight Commander Kae, wander the thick forest in search of information about their missing spy. What they found was a battle against their century-long enemy, the Shaedyn. Will they prevail or face the same unknown fate?
Kieran McKiel - Hummingbird
Far from home and missing his love, Marco is fighting a war to end all wars. When hope seems lost, a strange entity appears with an offer to help him survive.
A. A. Warne - The Masters of Fire
The Masters of Fire were once a powerful brotherhood, but now only two of their brothers remain in the free world. Will they be strong enough to liberate their kin from the clutches of the Mad King? Or will an uncomfortable truth unravel their master plan?
B. R. Storm - The Harbinger
Since the beginning of Earth, Watcher has been tethered to immortality, waiting for the final soul to depart. The day finally comes and Watcher prepares for rest, but he’s confronted by the bringer of apocalyptic carnage.
Ilona Krueger - Song of my Soul
Always the realist, Felicity does not entertain anything that is unscientifically based. Her clinical assertions leave no room for magic and imagination. It is said, however, that Pride goes before a fall. And fall, she does. Is there salvation from the pit? Does she rise from the ashes? Is there hope for a new understanding?
Serena Dawson - A Spark of Courage
Prince Zabriel’s fire magic is weak, but Princess Maniela’s will to defy their cruel father is strong. Zabriel agrees to help his sister, and she leads them into a battle that will determine the fate and future of their kingdom.
Michelle Crow - The Flame
When Momma Courtney shows up on Prudence's doorstep and draws magical wards to protect the house from an impending attack; Prudence's reality is thrown into chaos as she discovers she's the last Flame Keeper. Now with the entire village's lives in her hands, can she save them from the body-snatching Ifrits with her untrained powers?
J. T. Moriarty - Petals of Autumn
As the legendary dragon, Flallemin, sets its sights on Goblin Birchwoods, Wedina has an impossible challenge: train the entire tribe. While there are plenty of shields, there’s only one sword and Wedina knows it’ll take more than might to deal with the hungry dragon.
Also featuring:
R. A. Darlinge & Aörali Eden - Fated Shadows
Goodreads * Amazon

Where were you born/grew up at?

Adryanna - I grew up and still live in southeastern Massachusetts, right in the heart of a fun little place called the Bridgewater Triangle. If you’re into superstitious, creepy stuff, look it up! I swear that my childhood home was haunted.

Amanda - I was born in the same hospital as my mother and my own children, in the exact same spot where we still live - at the bottom of the Blue Mountains, in Sydney Australia.

Brandon - I was born in Jacksonville, Florida, but I didn’t start developing memories until I was already in Broken Arrow, Oklahoma. By the age of 8, my mom and I moved to a farm outside the small town of Tisdale, Saskatchewan in Canada. At 16 years old, I found my way full circle to Jacksonville.

Brittany - Tennessee and Tennessee. But I've lived in Texas (briefly) and England, so that's cool.

Debi - I grew up in the suburbs outside of I’ve Baltimore, and after living in Florida through college, I came right back. It’s hard to move when several generations of family live in the same place.

Ilona - I was born in Sydney and grew up in various locations in Sydney. We lived at the Villawood Migrant Hostel while Dad was building a garage for us to live in on a block of land in Liverpool. Later we moved to the Bankstown area. I have very fond memories of living during a time when life was simple, and our expectations were modest.

Jay - Born in New South Wales, Australia, but about half the people I meet or serve ask me where I come from or when I got here, because apparently, I have an accent. I’ve been asked if I’m American, south African, Swedish, Canadian, Irish (closest, 5 generations ago maybe), English, the list is looong.

Kieran - Born and raised in northern Canada. Because it’s so remote that far north, everything is pretty small and quiet compared to down south. That has its advantages, though it can also get boring.

Laura - I was born in the lovely state of Washington and lived there until I was fourteen where I moved to Idaho. I miss the rolling hills and mountain views the plains of South Dakota just doesn’t have.

Serena - I was born and grew up in the whangarei area, which is in the north of the north island of New Zealand. I grew up on my parent’s farm with my two sisters and two brothers.

Vicky - I was born in Ashington, in the county of Northumberland in England. I grew up in Western Sydney, Australia. I now live in the Blue Mountains. I sadly do not have a Geordie accent.