Their love brought scandal and demons.


Lucy Easton, an aspiring novelist, will do anything to help boost her chances at publication—including betraying her family. But when she crosses paths with the charismatic Alexander Melling, her aspiration for success pales in comparison to the attraction she feels towards him.

Alexander is a young lawyer from a powerful family, striving to free himself from his father’s shadow. The more time he spends with Lucy, the more desperate he becomes to shed the secrets of his past—a past which can destroy the both himself and the woman he’s falling in love with.

While Alexander struggles with his past sins, Lucy must decide whether loving him is worth risking her own safety…and her heart.

From gossip magazines to gleaming Mardi Gras balls, Lucy and Alex navigate the Edwardian era in the Deep South with both passion and guilt. 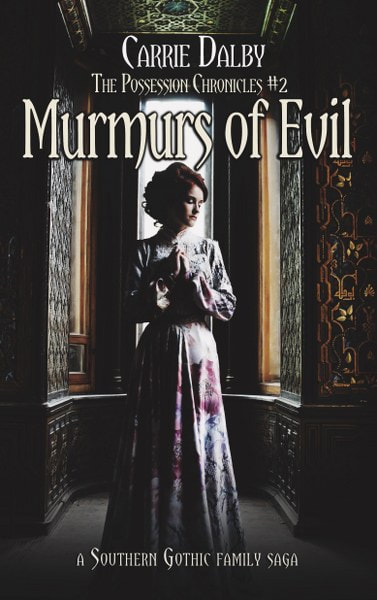 During the spring of 1906, Magdalene Jones is hired to be a companion to Ruth Melling at Seacliff Cottage, the Mellings' second home on Mobile Bay. Magdalene's simple country upbringing is no match for high society banter and a manor hour infested with demonic activity. Alexander, the Mellings' bachelor son, and Magdalene find themselves oppressed by demons playing upon their lusts. Claudio De Fiore--a young Italian deacon training to become a priest--and newly arrived from Scotland, Douglas Campbell, seek to protect Magdalene from the evil within the walls but they themselves might be part of the trouble.

Carrie Dalby, a California native, has lived in Mobile, Alabama, since 1996. She’s published several non-fiction articles in national and international magazines, served two terms as president of Mobile Writers Guild, worked as the Mobile area Local Liaison for SCBWI from 2012-2017, and volunteers with Metro Mobile Literacy Council’s annual Young Author events whenever possible. When Carrie’s not reading, writing, browsing bookstores/libraries, or homeschooling, she can often be found knitting or attending concerts.
Carrie’s two young adult novels are Fortitude(historical) and Corroded (contemporary). Fortitude is listed as a “Best History Book for kids” with Grateful American Foundation for its historical accuracy and being an engaging read for fifth through tenth graders.
Her current project is a historical Gothic family saga for adults, The Possession Chronicles. The first book in the series, Perilous Confessions, released in January 2019 from Bienvenue Press and the second book, Murmurs of Evil releases June 11, 2019.