Chronicles of a Hero - Book Tour and Giveaway 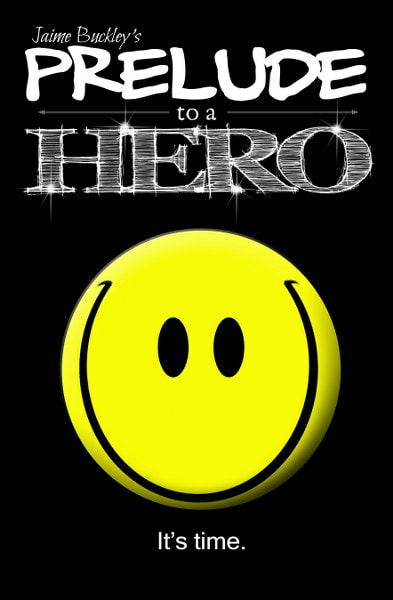 Prelude to a Hero
Chronicles of a Hero Book 1
by Jaime Buckley
Genre: YA Fantasy

Nerd. Introvert. He was the hero they never knew they wanted.


All Wendell hoped for was a decent job, a hot new car and a girlfriend to match.

What he got was the mantle of a legendary hero, the heart of a girl who had no idea who he really was…and a diamond bigger than his fist.

What could possibly go wrong?

Prelude to a Hero is book one in the Chronicles of a Hero series, by Jaime Buckley. If you enjoyed Tiffany Aching, Harry Potter or Hitchhikers Guide to the Galaxy, then you’ll love this humorous, original epic fantasy, packed with magic, mystery and sharp kicks to the funny bone.

"I'm already a HUGE fan of fantasy fiction, this book appealed to me as I felt it would be something new and unique... I wasn't left disappointed!" 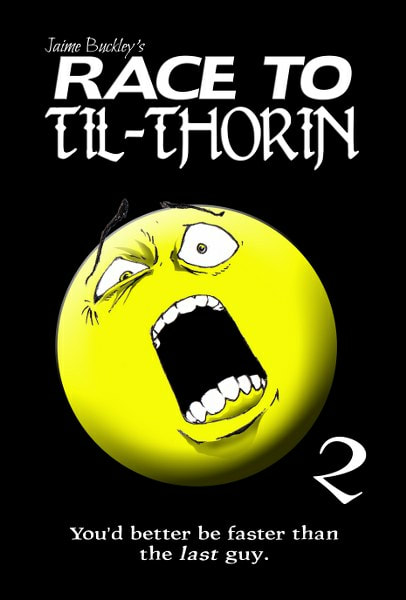 Race to Til-Thorin
Chronicles of a Hero Book 2

Being a hero comes with learning curves.

It wouldn’t be so bad if Wendell had professionals to help him.

Instead, he’s stuck with a feisty gnome, a senile old wizard and a green skinned, cigar-smoking babysitter to guide him.

Is it too late to quit?

Fans of epic fantasy will cheer Wendell on as the Chronicles of a Hero series continues in book two. Those who enjoy the world building skills of J.R.R. Tolkien, J.K. Rowling and Brandon Sanderson will surely get addicted to this original new world.

Feed your fantasy needs and grab your copy today!

"I have not laughed so hard in a long time. I don't KNOW how long it's been. Just when the tension is about to make my heart pop, Chuck or Dax or a situation will pop up and make you laugh." 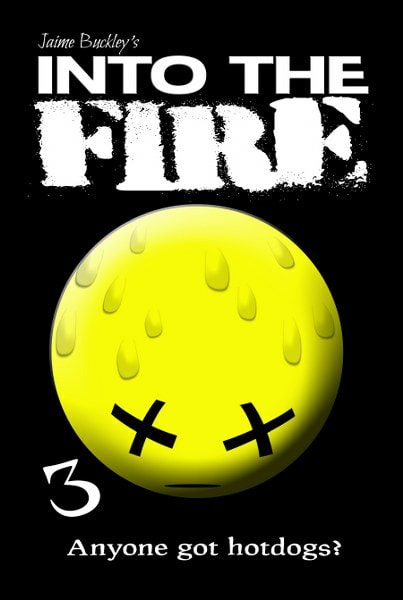 Into the Fire
Chronicles of a Hero Book 3

Stranded, alone…with a tree sticking out of his bellybutton.


Wendell’s task is simple: get to Til-Thorin Keep.

Add to that no map, no help and no flippin’ idea where he is and you have a day in the life of our hero.

Oh wait—we forgot to add the army of cannibals now nipping at his heels.

Elemental magic and nail-biting action are what you can expect in book three of Chronicles of a Hero. Fans of Dragonlance and The Hobbit will love this new addition to the series.

Don’t wait to grab your copy—buy one today! 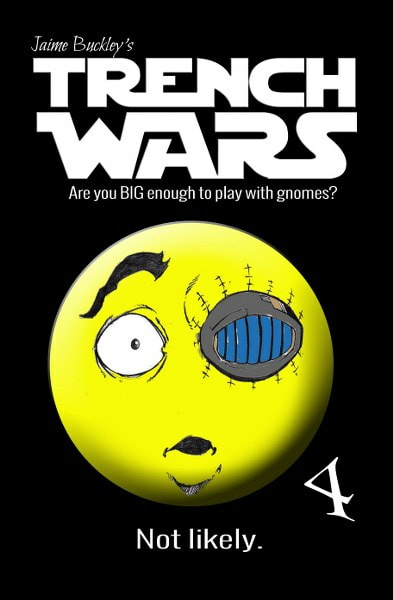 Wendell is dying for a change of scenery, but Clockworks City has a ban on all outsiders.


It’s a law punishable by death.


By competing in the #1 televised extreme sport in the country, of course.


Enjoy bullets, babes and a bowl of mushroom soup as this series jumps from humorous fantasy to comical science fiction! If you enjoy a good laugh, intense action and unexpected endings, you’ll love book four in the Chronicles of a Hero series.


Grab your copy and keep the epic buzz going! 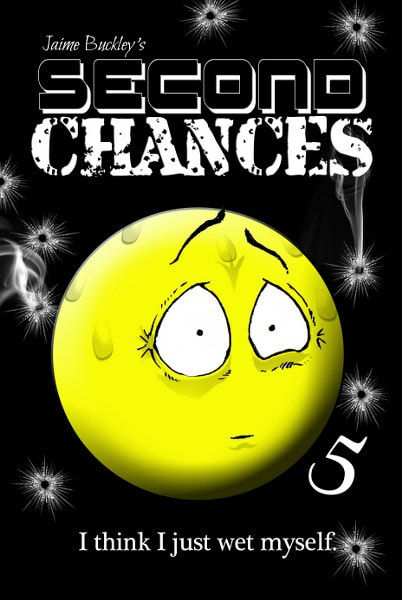 Wendell’s chance at the title was always a long shot.


Since then he’s been on TV, Radio and even has the attention of The Church.


Fact is, he’s more popular than ever.
So why are people trying to kill him?
(It’s the cheesy goatee, isn’t it.)


Second Chances is book 5 in Jaime Buckley’s Chronicles of a Hero series. Laugh, cheer and bite your nails as this epic fantasy takes you on a crazy ride, twisting down ramps and out a back window!


Pick up a copy today!


"You know you have found a great book when you want to slap the author and give the author a hug at the same time, when you take some of the plot turns personally." 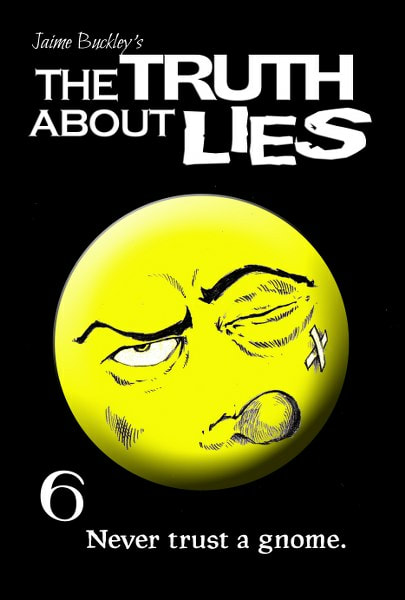 The Truth About Lies
Chronicles of a Hero Book 6

Wendell and Dax are exposed and the gnomes of Clockwork City are freaking out.


Are they spies? Is this an invasion? Was this all just a terror tactic to get gnomes to pay their taxes?


Now with Wendell under arrest and Dax under armed guard, it’s going to take a pardon from President Shrub to set them free.


The Truth About Lies is book six in the Chronicles of a Hero series by Jaime Buckley. The series that makes you laugh, squirm, grit your teeth and has you begging for more.


Make sure to grab yourself a copy!


"I loved this book because it takes a misfit who was never really liked or appreciated and it shows the beginning of the process of him unlocking his potential and becoming something greater than anyone would have imagined for such a small, insignificant person." 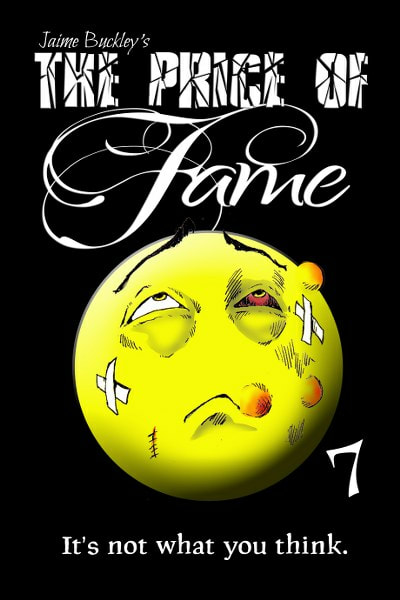 The Price of Fame
Chronicles of a Hero Book 7


Then it gets confusing…


Wendell’s learned that gnomes are just as irritating and dangerous as humans…they just come in smaller packaging.


Citizens are rebelling, the government’s collapsing, the Church is selling off the poor and Dax’s head on the chopping block.


All Chuck needs to get everyone home is a city wide diversion, a flying S.L.A.G., four lawyers, a hand grenade…and a tiny bit of string.


It feels good when a plan comes together!


The Price of Fame is book seven in the Chronicles of a Hero series by author Jaime Buckley. If you love a good laugh and incredible plot twists to keep you guessing, this book will curl your toes and put a smirk on your face!


"…packed with wild imaginations and inspirations. It’s a rarity that a YA book contains the combination of those three things but Wanted: Hero has them. Seriously, you don’t want to miss reading this book in your lifetime." 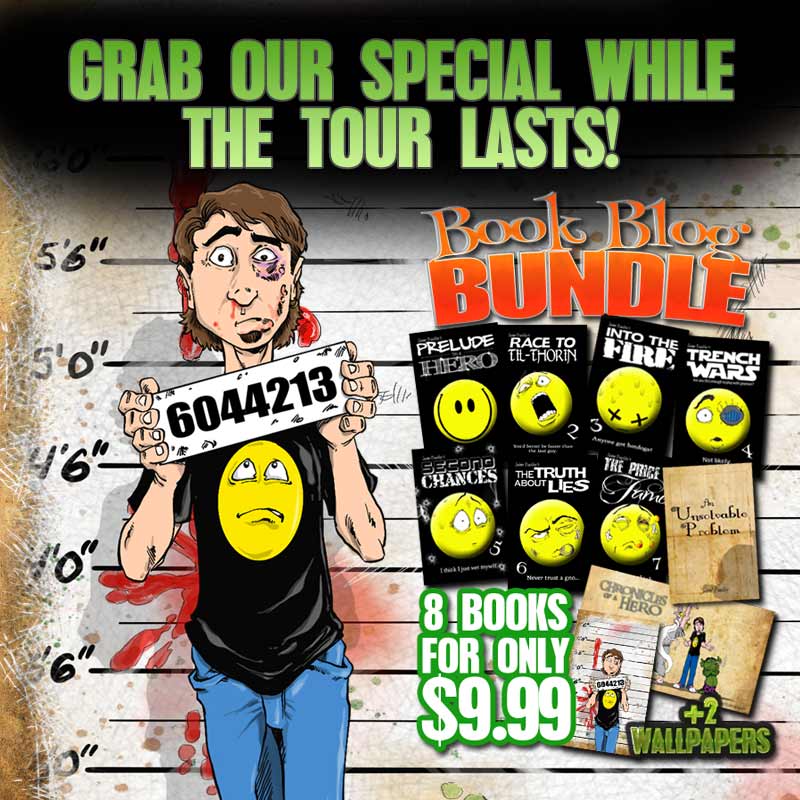 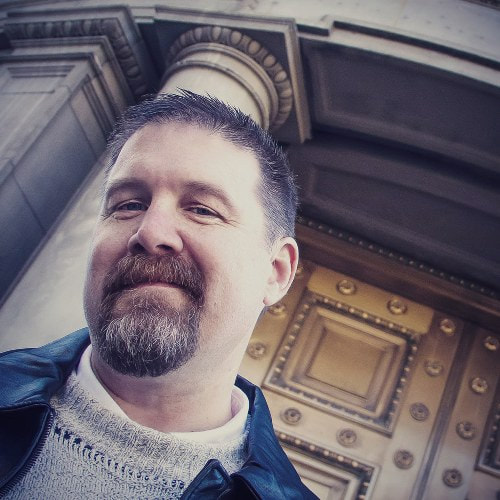 Jaime Buckley married young, winning the heart of a beautiful Samoan princess and together, they had 12 amazing children.

One of the original ‘lost boys’ of Peter Pan, Jaime never truly grew up. Though he is respected as a traditional father figure, he still enjoys late night conversations with Santa Clause, flirting with the Tooth Fairy and has an occasional beer with Bigfoot. Wizards and warriors seek his counsel while monsters tremble at the mention of his name.
An accomplished writer and illustrator of all things fictional, Jaime has a passion to entertain and uplift. He loves God, his country, his family and continues to expand his influence and friendships by stepping onto the Twitch platform as a Creative streamer. Jaime can always be found through Wanted Hero, his greatest project, and passion.

What are my hopes for Wanted Hero?
I had someone ask me what I wanted to get out of Wanted Hero.
A bit confused, I asked them to clarify.
"You know, do you want to be rich or famous? Have a movie made of your books or what?"
Oh. I had to think about that.
Wanting to entertain people has been in my blood for most of my life. So the first thing I would say is that I would like the story to be famous, not me.
If you look at most authors, they revolve their blogs and websites around their names as the branding, not the story. It does happen, but I think it is the exception, not the rule.
I live through this storyline.
My hope is to hear that you love the characters, the places, the story, that you talk about it with friends and recommend it. If I'm fortunate, someday people will write me and ask questions because this has intrigued them.
It doesn't matter if anyone knows me. If they know Wanted Hero and that the author of that story cares about his readers, I'm good.
I don't think past that.
Wendell deserves to become famous, not me.
As for money, that's a dangerous wish. Not that I hate money, I'm just not fixated on it beyond wanting to care for my family. Whatever it takes to care for Kathilynn and the children and be able to create Wanted Hero stories as my full time living would be bliss.
So buy a book (or seven) from WantedHero.com if you have an eReader.
As for Hollywood, I'm not too sure.
Movies always sound cool, but I'm in this to create multiple intellectual properties: games, toys, swag, collectibles, and many products actually used in the books, etc....and from what I learned from David Farland, you sign those rights away when you negotiate a contract with Hollywood.
I'm not ok with that...even for a huge payday.
I have more confidence in myself than that.
Now, granted, I'm completely ignorant in this area. However, money wouldn't be the main motivator for me...so someone would have to find my hot button.
However, if someone wanted to approach me about an animated series or an animated feature film, I’d be a lot more interested.
That being said, we've been busy around here for the past few years. One of our readers created a Wanted Hero card game. We have other games designed, including two board games and an RPG, based on the world during the time of the Demoni Vankil. We also have a family game called GoSmiley! that’s doing really well on Amazon, as well as other ideas in the works….and of course, more books.
When it all finally hits the web, I think people will be shocked.
But do you know what I wish for, more than anything else...as my personal dreams for this story?
If you promise not to laugh, I'll tell you.
1. That an international agent will find me and help me get Wanted Hero into multiple languages and sell the rights around the world.
2. To have Wanted Hero entries on Wikipedia...and to create our own wiki about Wanted Hero and all its aspects.
3. That I'll develop fans that create artwork, websites and grow this into a culture. This is mainly because when fans get involved, creativity explodes off the charts...and I LOVE creativity.
4. To help change the lives of a million kids. To inspire them to rise up and become everything they can me, despite the odds, to be the very best THEM. Kids are the #1 reason I do this.
So there you have it.
My hopes, my dreams, all in a nutshell. 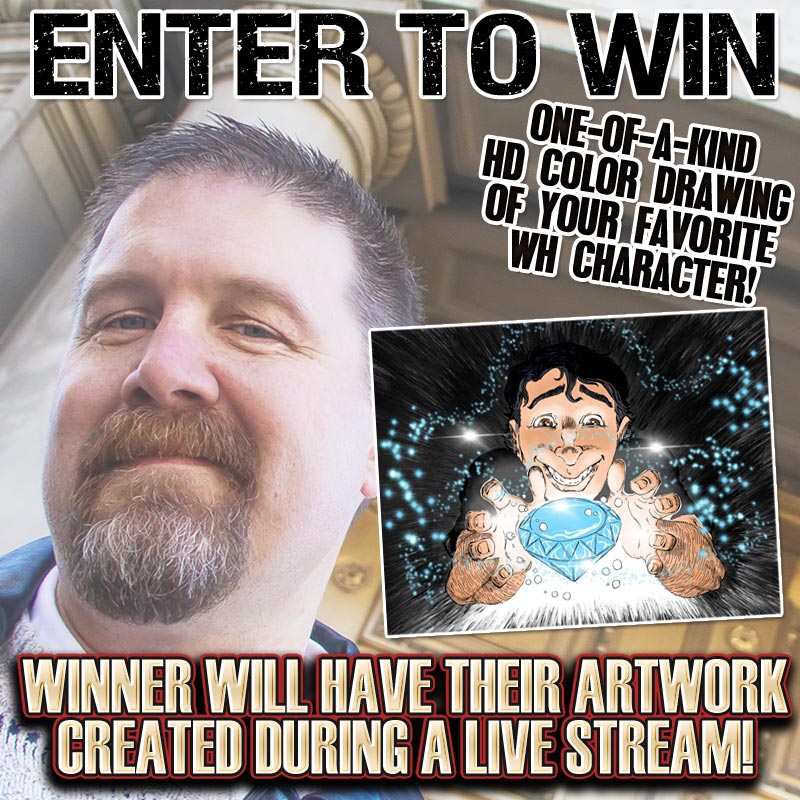 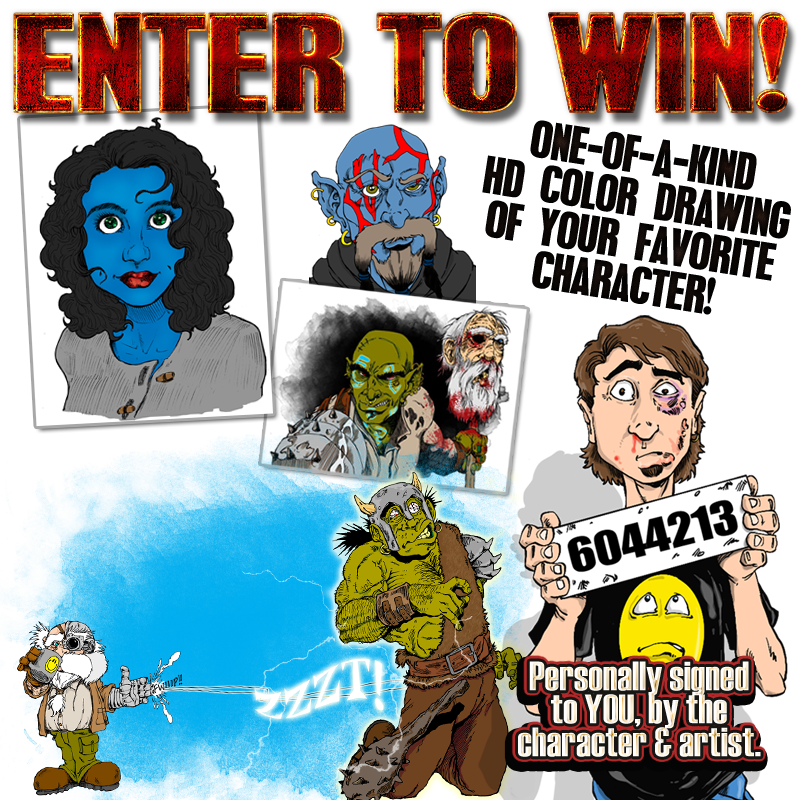 #1)A one-of-a-kind full color HD character sketch from the books--of ANY character the winner wants, created in a live stream session and autographed to the winner by name. (a $300 value)

#2) a PDF copy of the first 5 unedited chapters of Chronicles of a Hero, Book 8: Howling Shadows
(scheduled to be released fall 2019)


#3) A digital copy of 'An Unsolvable Problem' (any format)--the Origin Story of Dax, one of the main characters of the Chronicles of a Hero story (not available for sale).