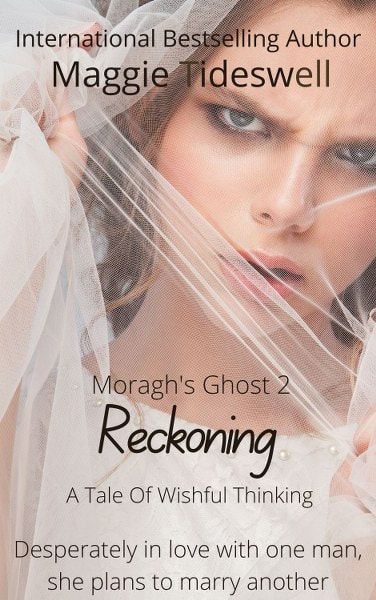 Desperately in love with one man, yet she planned to marry another.
Why?

Nicole - Joshua replaced her when he married a stranger. Over her dead body would he get away with her inheritance as well. He was going to have to marry her before the month was out, as Daddy stipulated in his last Will & Testament - his marriage to Holly wasn't real anyway.

Ned - He never tried to hide his feeling for Nicole, but this was ridiculous. But he was a patient man - he'd hang around to see how her plans panned out, and pick up the pieces when she spectacularly failed. She was carrying his child, after all.

Joshua - Nicole's ship had sailed - there was no way he's put Holly, his brand new wife of barely a week aside to marry Nicole. Her father knew what he was doing.
No one seemed to understand Nicole's priorities. She had to reclaim what should have been hers before she could be with Ned. He expected her to be independently rich.
If only the ghost of her mother would give her peace to concentrate on planning the wedding of the year for her and Joshua. She only had a month.

Daddy never said anything about staying married to Joshua.

"Excellent read! Maggie Tideswell's book is impossible to put down. This writer is skilled in evoking deep emotions in the readerA pleasure to read." - Amazon Reviewer

A marriage of convenience - no strings attached - suited both Holly and Joshua just fine; a virgin marriage, so that they could both walk away… But they made a crucial mistake: they didn't take chemistry into account.

Holly —
Seriously? They actually advertised for a husband for her without telling her?
She was going to have to kill them, stone dead.

But having a ‘husband’ behind her would give her an edge she didn’t have now. Donald, her ex, and his wife would have to revise their strategy of keeping her children away from her. That was an advantage worth taking a risk for. But what kind of man was likely to respond to a tiny ad in the newspaper no one reads anymore?

Joshua —
Nicole had to marry him now or let him go. He was done waiting, but he did not know what else he could do to persuade her to his way of thinking. Until he saw the little ad in the paper. A plan fell into his head as if he'd snapped his fingers. This woman who audaciously advertised herself as available would do perfectly. Married to another woman would make him irresistibly attractive to Nicole – as was the case with everything she wanted and couldn’t have.

From the moment Holly accepted Joshua’s offer of marriage, strange things started happening to her, and the strangeness followed her to her new (temporary) home. She was going to have to unravel a decades-old mystery before anything else.

A ghost, a wronged fiancée, and trouble with everyone around them. Will Holly and Joshua get what they’ve set out to achieve?

Maggie Tideswell, internationally acclaimed bestselling South African author, has a passion for romance. All over the world people are falling in love, making it love, not money, that makes the world go round.
Ghosts just can't seem to leave her alone and she combines things that can't be explained, sweaty bodies and rumpled beds in a way that will make your toes curl and your hair stand on end.
Maggie just can't do without perfume, coffee and the internet. She is nearly as passionate about food as she is about creating alpha heroes every woman will fall in love with, just as she does, every time.
The strangest thing is that cats have never played any kind of role in her stories, as she is owned by three of them.
That might change soon.

ebook of Trapped in Yesterday,