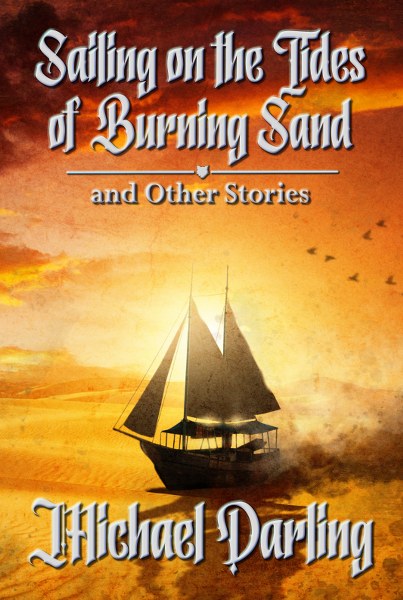 Sailing on the Tides of Burning Sand and Other Stories
by Michael Darling
Genre: Science Fiction, Fantasy, Horror, Short Stories

These amazing stories and more await between the covers of Michael Darling’s first short story collection, featuring all the stories from his bestselling Tales from the Behindbeyond series, including an exclusive new story "The Morrigan's Sister," only available in this volume. From humorous to frightening to thought-provoking, these twelve brilliant stories are an enchanting gift from one of fiction’s most inventive new voices.

"Michael Darling is a talent, a master of perspective and playful storytelling.” - Johnny Worthen Award-Winning Author of What Immortal Hand

"Sailing on the Tides of Burning Sand" - Science Fiction

A man and woman, apparent strangers, sail over a surreal desert landscape on their way to a dangerous and uncertain destiny.

A young woman, working beneath a futuristic city, learns that some risks are worth taking.

A defense attorney knows her client hid his girlfriend's body for weeks in a freezer, but his motive is even more bizarre than the crime.

Harry Houdini and Charles Dickens meet in outer space to entertain a planet of angels, until a demon appears and there is no escape.

"Grandmother Who Breaks the Sky" - Fantasy/Horror

Ray Bradbury meets H.P. Lovecraft as a little boy defies the curse of a mummified Indian princess, prepared to halt the emergence of an ancient god, even if it costs the lives of everyone close to him.

A 19th-century scientist proves his theory that he can scare his wife to death, but when he succeeds, the real nightmare begins.

An NSA agent wants to get close to the cute guy on the train until a viral outbreak brings her closer than she could ever want.

Hunting demons can be hell, especially when a vengeful ex delivers two demons for the price of one.

A Behindbeyond Tale. The Irish mob finds out that they've not only summoned a Fae from a magical realm to help them with a robbery, they've also summoned a more dangerous criminal. Winner of the United Authors Association Grand Prize.

A Behindbeyond Tale. Recounts the adventures of a young Fae halfling as he attempts to fulfill his mother's destiny. A story that parallels events from the bestselling novel Got Luck by Michael Darling.

A Behindbeyond Tale. Erin works for the Miami-Dade medical examiner's office and gets way more than she bargained for as she uses her magical powers to solve the mystery of the Popsicle Killer. Available only in this short story collection.

Tiny predators who live in the wall and feed on memories prove without a doubt that you are what you read. Winner of the Silver Quill award. 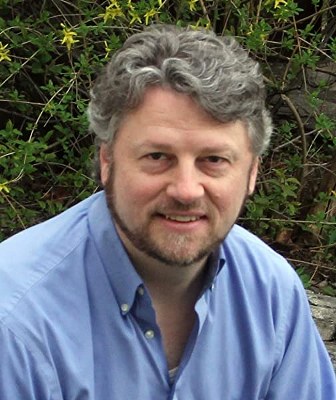 #1 Amazon bestseller Michael Darling has worked as a butcher, a librarian, and a magician. Not all at the same time. He nests in the exquisitely beautiful Rocky Mountains with his equally breathtaking wife, their normal-if-you-don't-look-too-close children and a very large St. Bernese dog named Appa. Yes, the Darlings have a "Nana" dog. Michael's award-winning short fiction is frequently featured in anthologies. Got Luck, his first novel, was published in March 2016 and the sequel, Got Hope, in 2017. Book three in the series, Got Lost, premieres in September. He continues to work on this series as well as other projects.

Michael graduated from Weber State University with a degree in English Literature and loves to blend the classic with the contemporary in his writing. His early work included several plays that were professionally produced along with a number of radio programs that aired in 80 markets around the world. Besides writing, Michael also loves to travel, dabble in languages, and cook elaborate meals.